At 5:00 am on January 31, 2012, I was awakened by my daughter who needed to be nursed.  Though I am used to this and know that it’s a normal part of mommyhood, I was slightly annoyed because I was in the middle of a pretty good dream.  No sooner than I got her back to sleep, I heard my toddler son hollering for me in the other room (we’ve been trying to night wean so he sleeps in a different room with my husband).  Although my husband was doing everything in his power to soothe my son, he was consistently crying for me.  I eventually got up and went into the other room to see if I could help all of us get back to sleep, even just for an hour or so.

At 5:00 am on January 31, 2012, I was frustrated that, after almost 3 years, we still haven’t been able to figure out how to get him to sleep through the night.

At 5:00 am on January 31, 2012, I was aggravated that even after my attempts to calm him, my son was wide awake and wanting to play when it was still dark out.  This was the second day in a row.

At 5:00 am on January 31, 2012, at the Cincinnati Children’s Hospital, two people were saying goodbye to their precious two year old daughter who finally lost her battle with a rare bone marrow disease.

Ayelet Galena was the granddaughter of my mother’s best friend from childhood and I have been following her fight on Facebook.  Every day, her parents posted her progress – from the bone marrow transplant to her kidney function.  Every day had its ups and downs, but no one ever gave up hope.  At 5:00 am on January 31, 2012, little Ayelet passed away.  When I learned this sad news, I was heartbroken for the family and I was also ashamed of my reaction to my son waking up just a bit too early.  I am truly blessed to have two healthy, happy children, and in the grand scheme of things, a little sleep deprivation isn’t really that big of a deal.  The tears that had been in my eyes from my frustration, turned into tears of sadness for the Galena family and tears of joy for how truly blessed I am.  I hugged my kids a little tighter and a lot more often, and although still quite tired, we went out and played our little hearts out.  We laughed, we wrestled, we read stories.  We had a fun day.  Now, I can’t say for sure that if my son wakes up at 5:00 am tomorrow, I’m going to be happy about it, but I will certainly try to keep things in perspective. 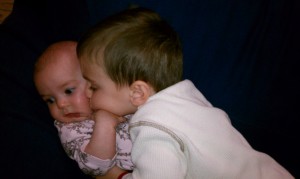