This summer, you were getting to be such a big boy.  You were growing by leaps and bounds in your physical, emotional, and vocal development.  You were also about to become a big brother.

Everyone told me that now that you were two and a half years old, I should send you to pre-school.  I know that they were looking out for both of us – we have always been so attached and with your sister on the way, it would be good if you became more independent.  I saw the value in this, but my gut told me you weren’t quite ready… and perhaps, neither was I.

Instead of waiting until after your sister’s arrival and having you feel that I was sending you away because of the new baby, I signed you up for a summer camp program at a prospective pre-school.  We talked and role-played about it and you were excited.  We even got you your very own backpack.

The first day of camp, I held your hand as we walked down the hall to meet your teachers.  Your eyes lit up with delight at the sight of all the new toys.  I hugged you goodbye and went down the hall.  I was going to stay in the building just in case you needed me.  I found a spot in the library and immediately began sobbing.  You were growing up.  Maybe you didn’t need me so much anymore.

Forty minutes in to camp, I was marveling at how well you were doing.  I peeked through the window once or twice and was both proud and sad.  I made sure you didn’t see me, but I wanted to tell you what a great job I thought you were doing.

I went back to the library and sat, not quite knowing what to do with myself.  Then, I heard a familiar cry.  The teachers had instructed everyone to clean up for snack time.  It was now quiet and focused, and it was then that you realized that I wasn’t there.  Although the teachers tried and tried to comfort you, you wouldn’t settle down.  I paced up and down the hall, my heart breaking, wanting so badly to rescue you, but not wanting to impose on the class.  After what was seemingly an eternity (but was only about three minutes), I was given the nod through the window.  I came in and held you as tight as I could, always reassuring you that you were safe and loved and that, even if you couldn’t see me, Mama was never far away. 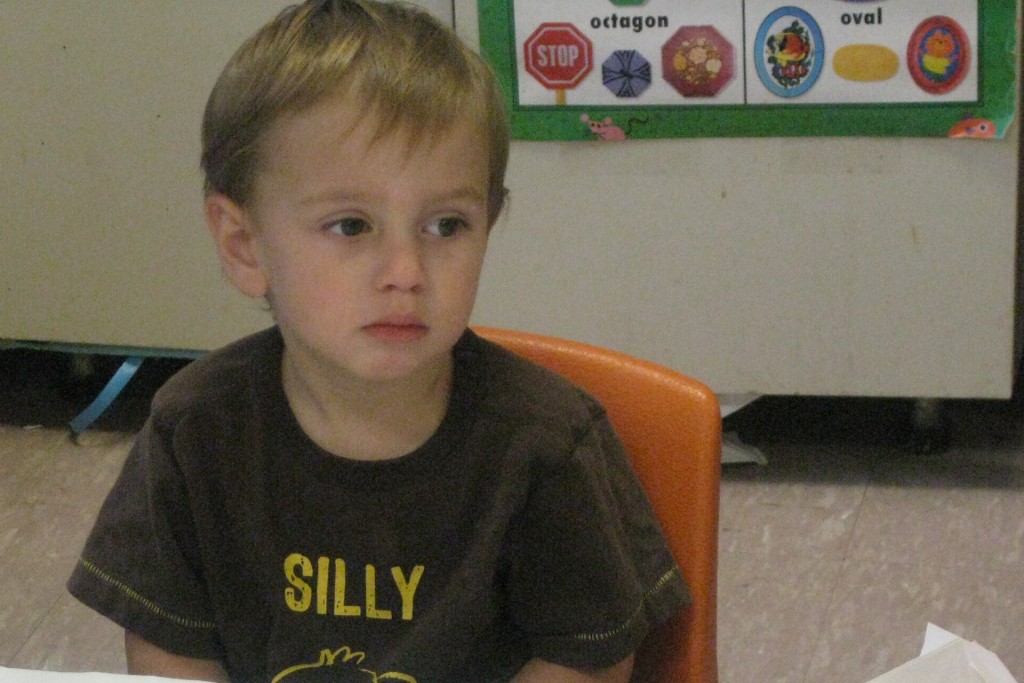 You requested that I stay with you, and the teachers allowed it.  I pulled up a yellow chair and sat in the corner of the classroom.  I watched as you interacted with the other children, explored on your own, and took in the whole experience.  You came back for hugs now and again, but as long as you could see me, you were fine.

The next day of camp, you asked if I was going to leave.  I told you that I had to go down the hall to give them a check and I would be right back.  I asked your permission to leave.  You told me I could go and I reassured you that if you needed me, I would come back.  I hugged and kissed you and walked out of the room.  You went to the art area and started painting a picture.  I sighed a sigh of relief and began my journey down the hall.  Seven minutes later, as my check got handed to the registrar, I felt it.  I couldn’t yet hear you, but I felt you.  My pace picked up as I rushed back down the hall.  I knew it was you.  The aide met me in the hall – she was on her way to find me.  I went in and held you as you sobbed and caught your breath.  “Let’s go home,” you told me in a shaky voice.  I took you outside, reassured you, nursed you, and held you close.  We decided after you regained your composure to go back in and play some more, with the condition that I stayed in the corner in my yellow chair.