Mama: They’re talking about voting.  Soon, we get to vote to see who is our president for the next four years.

Mama: That’s wonderful!  Unfortunately, you have to be 18 to vote, but you can help me when I vote!

Monkey: No!  My own vote!  I want to vote for MY president.

Mama: And rightly so, but you’ll have to do it with me this year.  Who would you like to vote for?

Monkey: The other guy.

Mama: Well, which guy do you mean?  The one who is already president or the one running against him?

Monkey: Hmmm… Who are you voting for?

Mama: Well, I’m voting for the person with whom I agree more and who I think has good ideas.

Monkey: Why? Is the other guy a bad guy?

Mama: [long pause] No, not a bad guy… just has different ideas that go against some of the things I believe in.  Do you want me to show you pictures of the two guys? 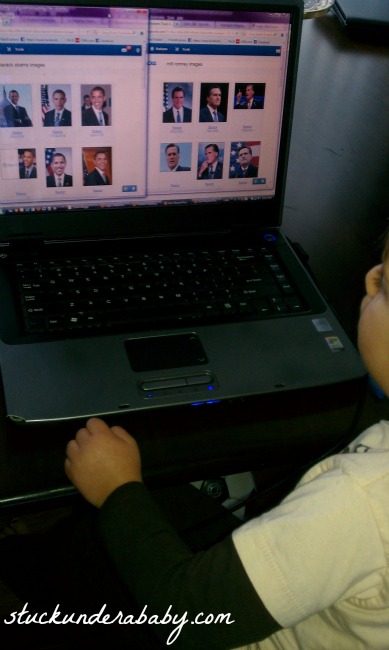 Mama: Okay.  Here’s Mitt Romney.  And here’s Barack Obama – he’s president now and Mitt Romney wants to be president.  They both want the same job, but only one guy can have it.

Monkey: Was Mitt Romney the president before Barack Obama?

Mama: No, a man named George W. Bush was.

Monkey: Was he a bad man?

Mama: Um… here, let me show you a picture of him.  But he can’t be president again so we have to choose between Barack Obama and Mitt Romney this time.

Mama: So, do you want to ask me any questions about them or do you know who you’re going to vote for?

Monkey: I know who I want to vote for.

Mama: You want pizza to be our president?